Rewarded ads are all the rage in mobile marketing. But their success can be traced to trained pigeons in “Skinner boxes” -- used to study and confirm the phenomenon of positive reinforcement.

Simply put, rewarded ads work because they “train” users to expect a reward in exchange for the desired behavior: watching an ad. Game designers know Skinner’s research well, having been oft-accused of exploiting addictive behavior in free-to-play games. But rewarded ads are no get-rich-quick scheme. As an opt-in format, users never feel forced or interrupted by rewarded ads, and as a result many now look for the format in apps.

Publishers report that the rewarded ads are the most lucrative, verified by success stories like Hipster Whale’s $3 million from opt-in ads and Zimad’s $200 to $6000 a day boost. Here’s how you can similarly maximize your own returns.

Rewards that feel like they are central to the app perform better than rewards that just feel like a nice bonus. Game developers usually go with in-game currency or an extra life. But some developers use more interesting rewards: multipliers or timed boosters that increase in-game earnings throughout the day, for instance. User demand has even led to ‘stacking’, in which users are allowed to watch multiple ads in a row to increase the duration of the boosters.

Developers of non-gaming apps can use rewarded ads as currency for in-app content like coupon rebates for shopping apps or a new pack of phrases for language apps. Users of Sworkit, an exercise app, can accumulate points for unlocking workouts by watching ads.

Rewarded ads can pop up where traditional ads can’t without annoying users: for instance, after every game over, or every time a lesson ends in a learning app. That said, placement is still critical to how a rewarded ad performs.

The best time to ask a friend for a favor is when they’re happy and well-fed. Similarly, the best time to ask users to watch an ad is when they’re feeling good--maybe after beating a high score for more points, or for unlocking the next routine after completing the day’s workout. Alternately, you can also play to our strong inclination for avoiding losses. For instance, you can save a player’s run by offering an extra life, or offer to save a broken streak in an exercise app after the user skips a day of working out.

Make the ads appealing -- and discoverable

Developers have little control over how traditional ads like banners or pop-ups appear in their app. Rewarded ads, on the other hand, give developers control over creatives. A uniform aesthetic can make the ads feel less disruptive, and reinforce watching as a natural part of the app experience. 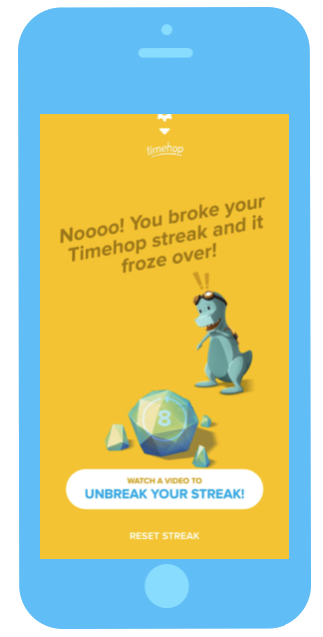 Eye-catching design is also important. Rewarded videos should also be placed in prominent spots where users will see the call-to-action or button required to launch an ad. This runs counter to an instinct many developers have to hide away rewarded ads within an in-app store: doing so will limit ad viewers to only the tiny subset of people also interested in paying.

Developers can always take cues from users: from which rewards they’re responding to, to when they want to get served with ads. Tenjin’s DataVault allows dives into raw behavioral data from users so they can tell which ads are performing, and which aren’t inspiring users to press play. You can start analyzing your rewarded ads today by signing up for free, or email us at sales@tenjin.io for setup help.